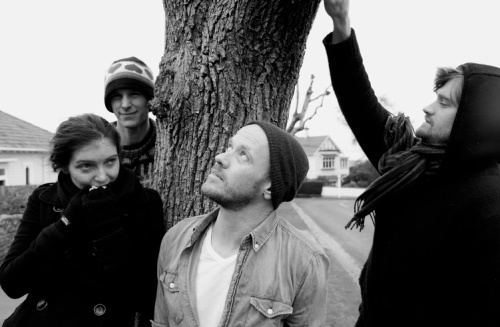 Their 1st album made its mark all over the world, praised as “psychédélisme plaintif” by French music weekly Les Inrockuptibles, given 10/10 in reviews by UK mailorder specialists Norman Records’ staff and customers and featured on BBC 6Music shows by Marc Riley and Gideon Coe.

US music blog The Finest Kiss described it as “Chills meets Belle And Sebastian pop alchemy” before saying “The Prophet Hens may be better than both” and making it their #2 album of the year for 2013.

Both albums by The Prophet Hens are available in the UK/ Europe from www.occultation.co.uk

The band, and the songs on the album, started when songwriter and guitarist Karl Bray was laid up at home recovering from major surgery to repair an ankle he’d smashed up while escaping a night-time mugging in downtown Dunedin. He jumped over a wall to get away, and, in the darkness, fell 12 foot…

The debut album by The Prophet Hens – “Popular People Do Popular People” – was released in August 2013. It is also available from the band’s Bandcamp page, the Fishrider online store, or from our UK friends Occultation Recordings.

“I really like that… I’ll be playing more tunes from that in future, no doubt about it” Marc Riley BBC6music 22/7/2013

“If you are a fan of the jangly New Zealand guitar bands we like here, you need to make a note of Dunedin’s The Prophet Hens.” When You Motor Away (US)

Here’s a Dunedin ‘porch session’ acoustic version of ‘Pretty’ by The Prophet Hens:

One response to “The Prophet Hens”